In recent years, the idea of local communities managing their natural resources has gained traction in the donors circuit, mainly in the World Bank.  Touted benefits include improved livelihoods, improved state of the resources, development of village-level infrastructure, and an increase in their political voices.

I look at two case studies over the next two entries to see if these results do indeed surface in practice, and what potential drawbacks community based coral reef management (CBCRM) may have.

The first case is the Bay Islands of Honduras, as compiled by Luttinger et al. (1997).  Here we see the typical influx of tourists into a reef system with a complete lack of infrastructure and protective measures to accommodate it.  The islands, over time, developed a sizable yet unstable economy dependent on the reef, that grew more vulnerable as degradation only increased. 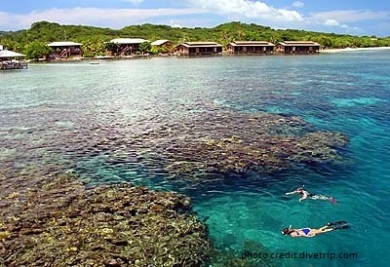 So once the tourists start to flow in, where do the necessary funds for conservation come from?  And how do stakeholders, from the hotel owners, to the waiters in restaurants, to the diveboat operators, all work together to ensure their local economy survives alongside the delicate ecosystem?

To complicate matters further, Western researchers and environmental groups often frame this as a Malthusian depletion of resources.  In many ways this is true, the resource is being  depleted, but who is actually doing the depleting? Is it the people who build the hotels for the tourists to come and stay in? Or is it the oft-victimized fishermen who extract from the reef to supply the restaurants and to fill subsistence needs? Or is it the tourists that fill the diveboats?

In the Bay Islands case, local islanders relied on reef fish for subsistence for decades–lobster, crab, conch and fish. Once reef-based tourism took hold, prices on these species spiked because of enhanced demand, as well as a dwindling supply in the waters.  This dwindling supply worsened with coral trampling, anchor wounds, trash, fishing lines, and other reef-damaging pollution created by increased reef activities.  It took a member of the local community to return from receiving a degree in marine biology to begin a consensus-building project involving the establishment of a marine reserve, plus the livelihood re-training program of the community’s fisher fleet.

The reserve’s success is evident in the re-proliferation of key reef species.  However, the reef is not simply a biophysical entity.  Political ecology posits the resources have the crucial socio-politico-economic angle that must be considered as well.   I would add cultural livelihood preferences as an obstacle, as the lives of fishermen were impacted on a personal level when re-trained as a waiter or hotel service employee.  Funding was an issue from the beginning, with most major cash flow coming from one large luxury hotel owner, funding which was later pulled once reef species began to recover.  In addition, the disproportionate power of local elites in all management decisions of the community based management scheme seems a pathological pattern in community resource management projects.

Possible solutions? It is quite difficult to see how the the poorest members of a population gifted with a precious natural resource could have their rights to subsistence taken away, their traditional livelihoods taken away, and still maintain a sound quality of life.  This raises complicated questions about how poverty increases motivations to degrade a reef, and what scale poverty needs to be addressed from.  Other options must be financed since these people are poor, but who should do the financing?

For me, it is hard to see a solution to a tricky management problem such as this without a payment for environmental services scheme to replace the income earned by traditional fishermen.  Again however, as is the case in many CBCRM schemes, who will pay the bill?  Perhaps a “green fund” like the one originally advocated for by the Group of 77 leading up to the Rio conference, but slated for coral reef preservation is the answer, with money coming from dues or fees from dive tourists and industry operators all over the world.